We love seeing edible insects and entomophagy getting prime air time. We’ve been really enjoying a series called ‘Back in time for dinner’ on ABC TV. The show follows a family of five- The Ferrone family – as they experience life over the past 60 years by living an entire decade in a week. Even their home décor changes week-by-week, as do their roles in the family and society, their clothes, their kitchen and of course their food. My favourite aspect of the show is how it views the past through the lens of food. Tripe in the 1950s, the emergence of Chinese food in the 60s, TV dinners and fondue in the 70s, nouveau cuisine in the 80s, kangaroo steaks in the nineties, and beef sliders and kitchen gardens in the 2000s. The final episode addressed what the food of the future might look like, and insects came up as a nutritious and sustainable food source. As they opened up the box from the Edible Bug Shop and realised that these were insects (crickets, mealworms and ants) and they were being asked to eat them, their reactions were comical; the faces they pulled! Admirably, they tasted them but they weren’t that impressed. Dad of the family, Peter, said he liked the mealworms more than the crickets (and I’m inclined to agree). The kids liked the marshmallows but got quite a shock when they found ants inside! Mum, Carole, said the satay flavoured crickets were a bit like chips but she disliked them and couldn’t wait to have a drink to wash the taste away. We weren’t surprised by their reaction, as we’ve introduced insect foods to the public and seen it up close. But its not all bad, many people are pleasantly surprised by the taste of insects and almost always understand the environmental benefits. They are typically surprised that insects are so nutritious. 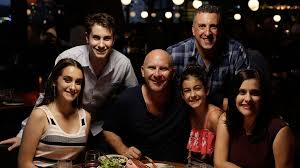 Our view is that roasted crickets, mealworms and ants are acceptable to us Westerners (not used to eating them) because of their texture: they are crispy and not gooey. And there are many products that are pleasantly flavoured with herbs, spices and garlic, for example. The insect foods of the future will not be whole but rather used as ingredients in more familiar foods like bread, pasta and biscuits. One of the conclusions made by the ‘future food’ episode is that food of the future will be healthy, delicious and sustainable. Insects as human food tick the healthy and sustainable aspects; the challenge to the insects as food industry to make insects delicious as well.